This summer the reality of the climate crisis hit home across the world. Fires ripped through California, floods surged through Germany and Madagascar is now on the brink of a climate-driven hunger crisis.

Behind these dramatic events, an even larger crisis looms: the collapse of our food system.

It’s clear that our infrastructure for housing and transportation can’t withstand changing weather patterns – and our agricultural infrastructure can’t either. Our food system, built on large-scale commodity crops that account for 24% of carbon emissions globally, is both inadequate and unsustainable. Most urgently, the threat of climate-driven famine is spreading across Africa, Asia and Latin America.

The climate crisis in Madagascar

Madagascar, an island nation off Africa’s southeast coast, presents a bleak preview of the problems ahead. Intense drought in the country’s Grand Sud region – which has seen almost no rain for nearly two years – is decimating agriculture production, increasing food prices and spreading waterborne diseases.

It’s one of the world’s worst humanitarian crises, with 16.5% of children under five suffering from severe acute malnutrition – the most life-threatening form of hunger.

The hunger gap – the period when food supplies start to run out and hunger begins – usually comes to Madagascar in October, but it has begun even earlier this year. 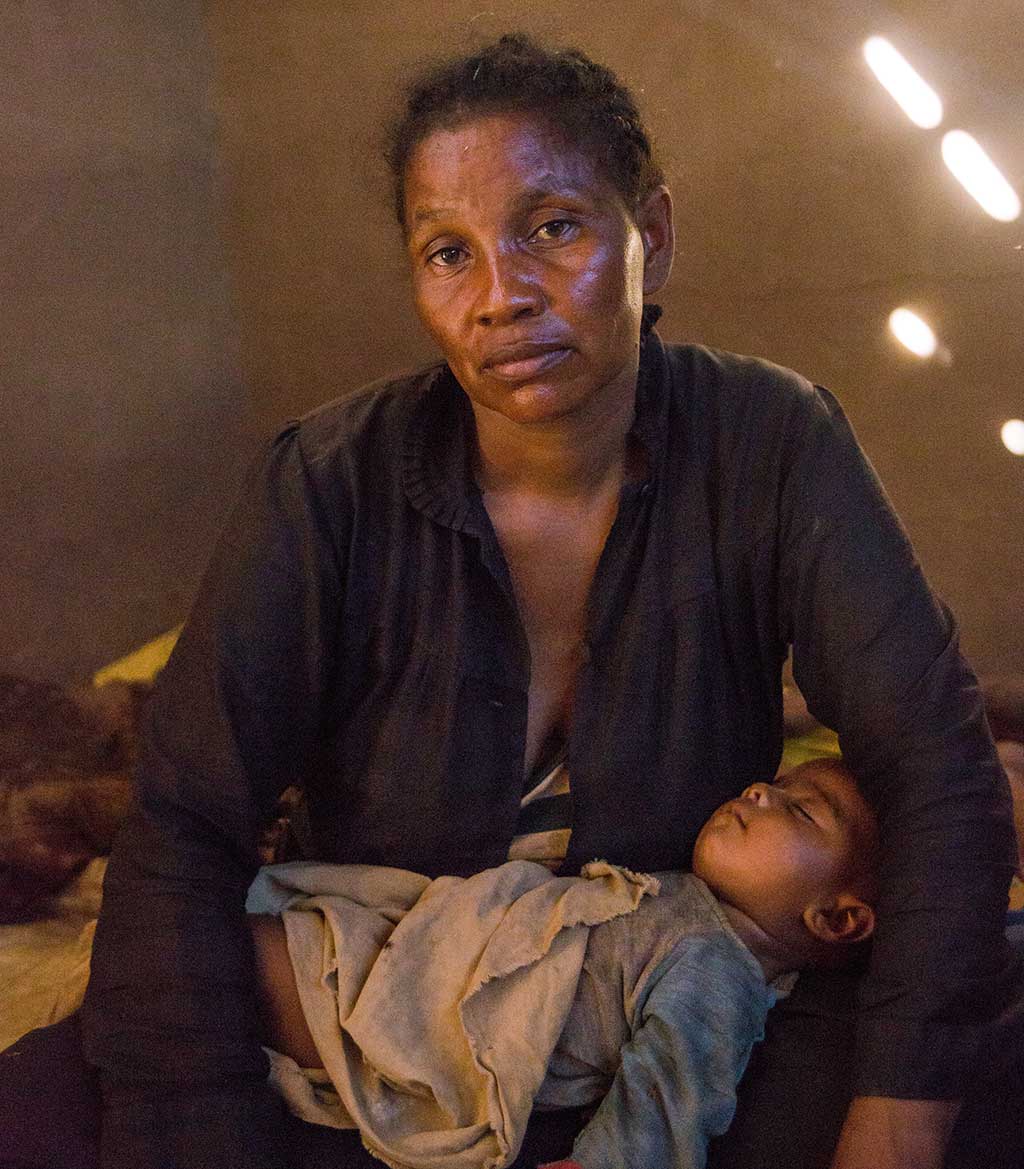 Tsiharatie, a mother from Madagascar’s Grand Sud Region affected by the climate crisis.

Action Against Hunger has set up emergency mobile clinics across Grand Sud, treating 9,000 new cases of dangerously malnourished children in less than six months. Our ready-to-use treatments can save their lives, but emergency clinics are a short-term for the long-term problem of climate change.

Little or no part in creating the climate crisis

People across Africa are suffering the worst effects of the warming planet, even though they emit less carbon dioxide per inhabitant than anywhere else.

The recent Intergovernmental Panel on Climate Change (IPCC) report has been called a “code red” for humanity.  To adapt, the world needs to see food scarcity as an infrastructure failure and prepare for it the way we would handle floods or wildfires.

In communities that depend on agriculture and livestock farming – industries that are incredibly vulnerable to drought – we’re increasingly turning to solutions such as agroecology, which incorporates sustainable farming and natural resource management.

Action Against Hunger provides equipment and education programmes on how to prevent plant diseases and insect infestations. We also share information on how farmers can grow their own seeds and encourage subsistence farmers to repurpose materials they can already access.

These types of solutions can be extended far beyond Madagascar. In Pakistan, saltwater flooding has become a major problem as the Arabian Sea rises and monsoon rains become increasingly intense. Last year, flooding in Sindh, Pakistan, left 300,000 people hungry according to the World Food Programme.  We’re working there with women farmers to produce hardier, more resistant crops, such as sugar beets; and doing training sessions on soil nutrition in these ever-changing conditions. 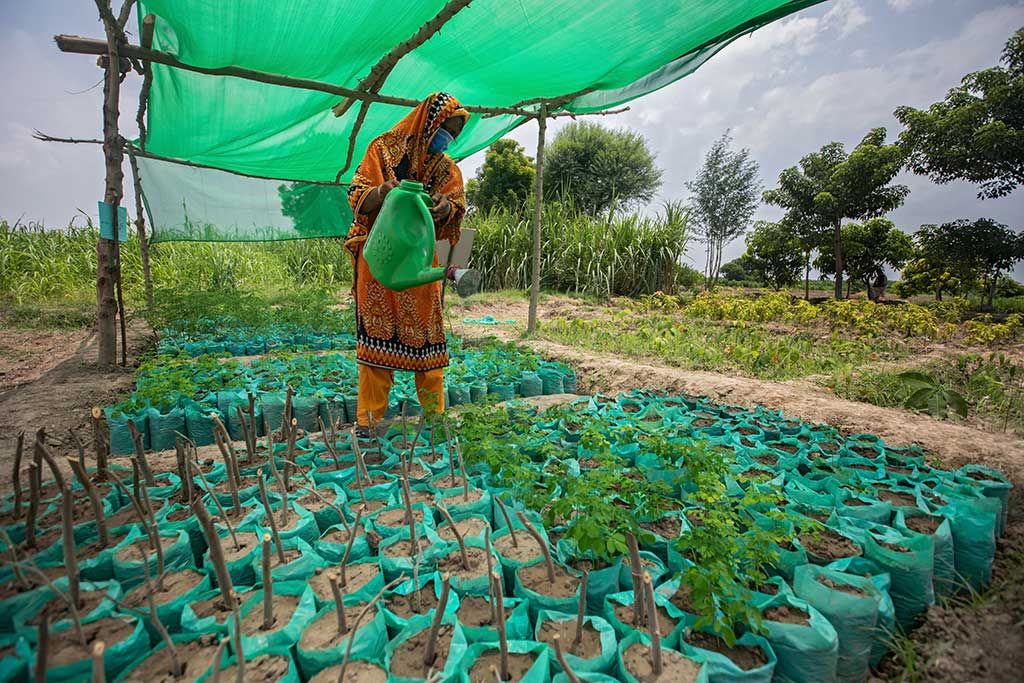 A woman grows crops at one of our farmer training programmes in Pakistan.

In Haiti, which sits on an earthquake fault line and is incredibly vulnerable to increasingly strong hurricanes, we’re providing small-scale farmers seeds, tools and training on eco-friendly farming.

Overall, securing an increased supply of food depends on switching to farming that does not harm the natural environment, restoring fishing grounds and habitats and promoting agricultural diversity. This will also lead to a reduction in global carbon emissions.

Yes, agroecology has its limits – it’s difficult to scale up to feed urban populations and it isn’t a universal solution, but in hunger-stricken countries like Madagascar, Pakistan and Haiti it can mean the difference between life and death.

As natural disasters continue to make headlines, it’s important to remember the fragile food systems that don’t recover easily, or at all. We need to build local infrastructure based on resilience and self-sufficiency for communities struggling to adapt to the rapidly changing climate. Global hunger is not an unmanageable or inevitable problem—we already know many of the solutions, but we’re running out of time to implement them.

This article is an adapted version of an opinion piece that first appeared in Newsweek. 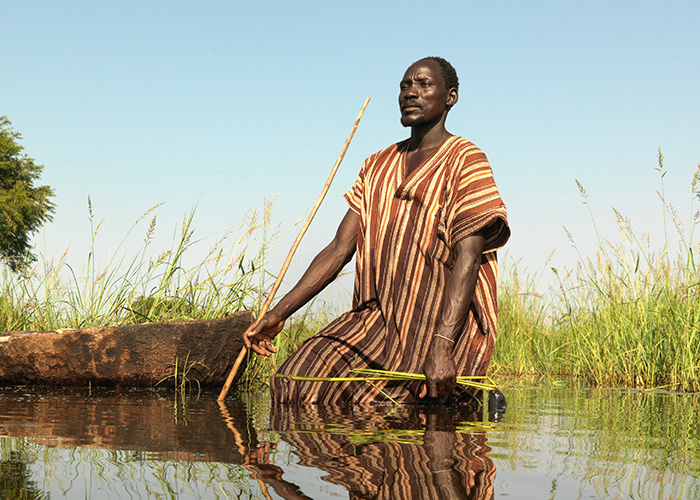 Rising temperatures and extreme weather are having a huge impact on communities already struggling to get the food they need.