Longer, more frequent droughts and an increasing number of storms, floods and heatwaves are just some of the most alarming effects of the climate crisis. The world’s poorest populations are being hit the hardest. Climate change is destroying crops and severely impacting livelihoods for communities that rely on the agricultural economy.

In Madagascar, the negative impacts of the climate crisis are obvious and worrying. The repeated extreme climate events of the last few years are now posing more of a threat to food security, water supply and public health systems. Communities are on the brink of famine as a direct result of the climate crisis.

In Madagascar, the unrelenting droughts make it increasingly difficult for mothers to feed their children. With temperatures soaring, families have no choice but to consume whatever water they can find – leading to a spike in the number of waterborne diseases. A combination of these factors is increasing the likelihood of children becoming malnourished.

Jean is a Programme Deputy Manager and part of the mobile teams that screen children for malnutrition in Ambovombe in the country’s South. Jean and the team have all noticed a significant increase in the number of malnourished children as a direct result of climate change.

“Climate change is making things even worse,” explains Jean.  “Without rain, there is no harvest. People start eating anything, like red cactus.”

The hunger seasons are lasting for months on end, and dry lands make it impossible for communities to cultivate the land.

“It used to rain in January, February and March and allowed for the cultivation of melon and pumpkin varieties,” says Jean.

Florentine is a nurse working at the mobile clinics in a town called Ampanihy, who takes care of children suffering from severe acute malnutrition – the most life-threatening form of hunger.

“It’s difficult to say what the future holds because it depends on the climate,” says Florentine. “I’m afraid that the cases will increase, because the climate is becoming even drier.”

Last year, Action Against Hunger implemented mobile healthcare and nutrition teams in Madagascar’s Grand Sud region.  We currently have 25 mobile teams serving communities who are unable to reach medical centres. These areas are often where you can find the highest rates of severely malnourished children.

“I would grow crops if I could, but there is no rain,” explains 25-year-old mother Dame. “I try to cultivate but it doesn’t work. I don’t have a source of income. I have nothing.”

38-year-old mother Maliha would give her children cactus leaves, just to put something in their stomachs. When she found the nurses at the mobile clinics, things changed for her.

“We have been starving for a long time,” explains Maliha. “Since there has been no rain, the children have not eaten normally.”

“The nurse’s care is a relief for us. My child was taken care of here.”

Communities in the Grand Sud region depend heavily on agriculture and livestock farming which makes them vulnerable to climate change. In some areas, families have not seen rain for almost two years. Extreme weather patterns are destroying crops, which is causing a serious food crisis in a country where 63% of the population are subsistence farmers.

Pierre is a Technical Officer in Nutrition, Health and Wash working at Action Intercoopération Madagascar, an Action Against Hunger partner in Bekily.  He’s part of a project that aims to improve the living standards of farmers in the region.

“When I was still living in the north of Madagascar, I had already heard about the damage caused by the climate,” explains Pierre. “Once I was there, I saw with my own eyes the barren, forestless land. I saw situations where you had to wait a year for rain.”

Lizà is a Food Security and Livelihoods Technical Officer who works for our local partners AFAFI. She’s seen first hand the direct impacts of climate change which is affecting farmers in the region.

“We have really seen a change in the climate this year. There were climatic disturbances that led to the disruption of the crop calendar. There has been a delay of the rains.”

Action Against Hunger, along with our national partners, stay in close contact with local communities to help them organise and manage their land. This intervention is helping over 4,000 households to set up market gardens and small-scale livestock farming operations. The aim is to improve food availability by advocating for sustainable farming and training.

“We choose ‘farmer leaders’,” says Lizà. “We train these farmer-leaders and then they share the knowledge. It’s easier for them to share the training with other members of the group.”

“The AFAFI project helps us in our work,” says Alfred, a farmer who has received training from the project. “It gives us the necessary material for agriculture. Our production is for both sale and consumption. There is a farming technique that the project teaches us, we then apply this advice. 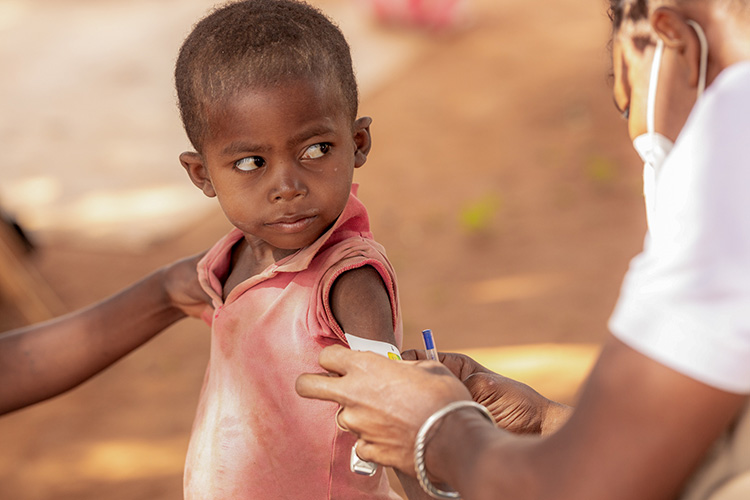 On the frontline of a climate-driven hunger crisis

The effects of climate change are ravaging Madagascar – a country that produces just 0.01% of global emissions. Intense heat, droughts and a lack of rainfall are having a devastating impact on the health of people living there.