Sister Ware Arbale, 27, is a Senior Paediatric Nurse at Yabelo General Hospital, Ethiopia. Ware is often very busy. Her main area of work is supporting the recovery of children fighting severe acute malnutrition – the most life-threatening form of hunger.

Ware often attends check-ups, listening to mothers explain new symptoms or improvements in their children. She keeps accurate records that indicate whether a child is improving or not, prepares and distributes food and therapeutic milk, and gives parents nutrition advice on the best way to feed their children.

“I’m very busy helping around this hospital,” says Ware. “We support our patients and help them in every way we can to change their situation.”

Many families in the region live in remote areas of Yabelo, far from the main town. Long dry seasons make it difficult for communities to get anything out of their land. Crops are dying and families are unable harvest food to feed their children. 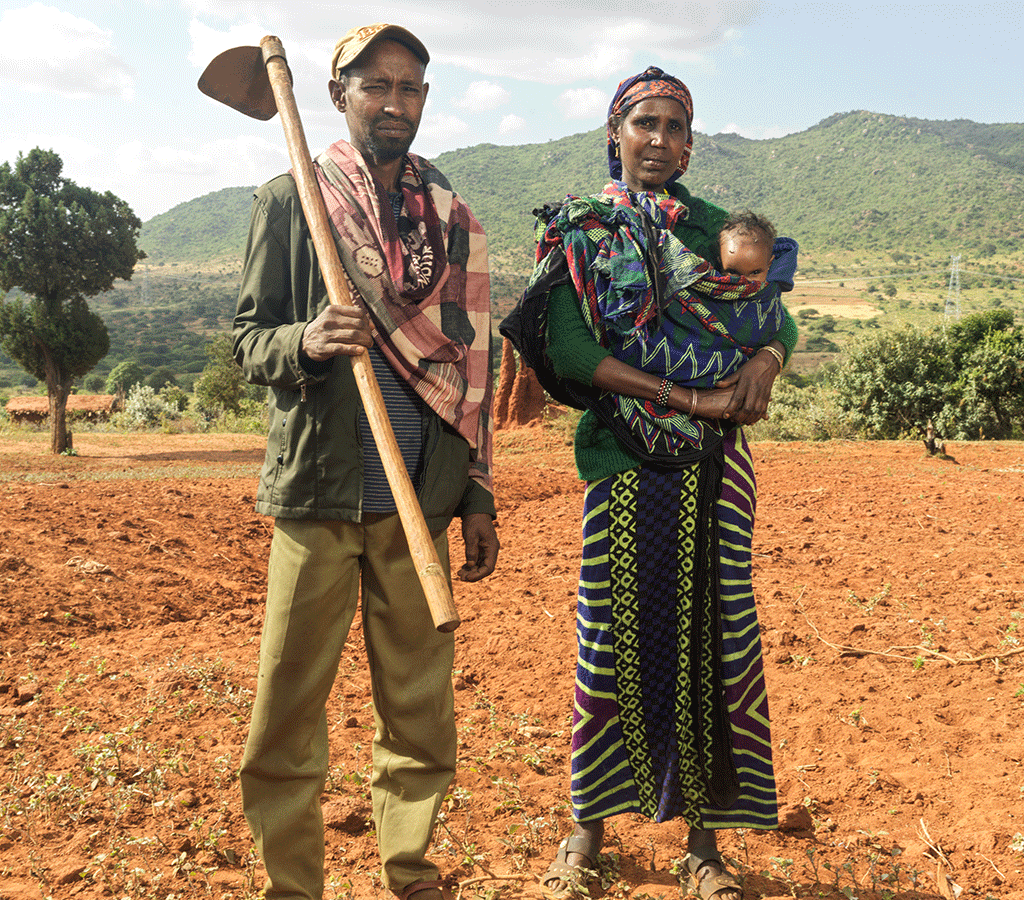 Kebele, her husband and Dabo stand among their dry land

“In this area people usually drink and use milk as their main type of food,” says Ware. “When there is no rain the cattle don’t have enough grass and can’t provide enough milk. Children less than a year old might be at risk of malnutrition.”

This is what happened to 10-month-old baby Dabo.

Dabo lives with her mum, Kebele, and her dad in a remote part of Yabelo. Dabo’s household depends primarily on livestock for food, but the family’s cows don’t have enough grass to eat and are struggling to survive.

Kebele and her daughter Dabo at Yabelo General Hospital

Baby Dabo became ill overnight. All of a sudden, she stopped eating and when her mother tried putting milk in her mouth she immediately vomited. Dabo’s condition quickly deteriorated. Her mother witnessed her daughter’s arms and legs getting dangerously thin. Kebele walked around for weeks asking if someone could help her baby daughter.

“I noticed that Dabo was getting thinner and thinner,” says Kebele. She stopped taking milk from her cup and even though I tried giving her food she wouldn’t eat it.”

After days of travelling, Kebele finally found Yabelo General Hospital – where nurses like Ware were able to treat her daughter.

When Dabo arrived at the hospital she was severely malnourished and ill. Thanks to Action Against Hunger’s training at the hospital, Ware and the other medical staff at the hospital are able to quickly recognise the signs of malnutrition – pale skin, thin arms, prominent ribs, and a very low mid-upper arm circumference, which indicates a child is malnourished.

Immediately after Dabo’s arrival a team of doctors and nurses gave her a blood test and assessed her body. They identified the symptoms of severe malnutrition and a skin rash. Kebele and Dabo were admitted to the stabilisation centre and given a bed where they would sleep.

“Action Against Hunger provided us with a lot of help,” says Ware. “One example is therapeutic milk that helps malnourished children become healthy. We in turn have helped a lot of children with this milk.”

After receiving the therapeutic milk and treatment from the medical staff, Dabo’s condition started to improve. Her skin rash started to fade away and she started to gain weight.

“Now Dabo can eat properly,” explains Dabo’s mum Kebele. “She eats the food that she gets from the nurses and I’m grateful for this.”

Working with mothers in Ethiopia

Ware enjoys what she does and goes the extra mile for the patients she works with. She often spends time with mothers and their babies who, like Dabo, are vulnerable and need her help. Ware sees first-hand the sacrifices mothers make to protect their children and wants to support them to look after them.

“I admire these mothers because they do everything they can for their children,” continues Ware. “They go from place to place asking for help and then they finally find us because they never give up.”

It’s thanks to nurses like Ware that children like Dabo are able to go back home, happy and healthy.

Mothers on the frontline

You can provide hospitals with life-saving therapeutic food to save children from starvation.

Your generous support helps us to save the lives of malnourished children like Dabo around the world. We’re also grateful for the support of players of the People’s Postcode Lottery, who enable mums like Kebele and nurses like Ware to tell us their stories about their children’s transformation thanks to the work of Action Against Hunger.